Examples of transcendental numbers include π (Pi) and e (Euler's number).

What then is an Algebraic Number?

Put simply, when we have a polynomial equation like (for example)

whose coefficients (the numbers 2, −4 and 3) are rational (whole numbers or simple fractions) ...

... then x is Algebraic.
(Read Algebraic Numbers for full details).

We can imagine all kinds of polynomials:

In fact it is hard to think of a number that is not Algebraic.

But they do exist! And lots of them! 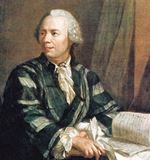 They transcend the power of algebraic methods.

Back in 1844, Joseph Liouville came up with this number:

It is a very interesting number because:

In fact, Joseph Liouville had successfully made the first provable Transcendental Number.

That number is now known as the Liouville Constant. and is in the class of Liouville Numbers.

It took until 1873 for the first "non-constructed" number to be proved as transcendental when Charles Hermite proved that e (Euler's number) is transcendental.

Then in 1882, Ferdinand von Lindemann proved that π (pi) is transcendental.

In fact, proving that a number is Transcendental is quite difficult, even though they are known to be very common ...

Most real numbers are transcendental. The argument for this is:

More formally, a transcendental function is a function that cannot be constructed in a finite number of steps from the elementary functions and their inverses.

An example of a Transcendental Function is the sine function sin(x).

Q: Why didn't the mathematicians use their teeth?

A: They wanted to transcend dental functions.